The jet water pipe is part of Trailing suction hopper Dredger, work together with Suction Pipe, through suction pipe, from the seabed dredging ship, the dredging method is similar to a vacuum cleaner. Ship fitted with one or several pumps, centrifugal pumps suck up water from the sea floor and mud, into the hopper of the ship. These operations are carried out during the voyage , while digging edge flight, heading for the hopper filled to throw mud mud area, through the mud bilge cases out the door. shiploads are trailing suction hopper with its capacity to indicate the size specifications, the general compartment volume is 500 ~ 1000m3. the minimum energy of trailing suction boat under construction in water depths of about 3 conditions deepened the largest trailing suction ship up to 3 to 35 or more. this ship belongs to the trailing suction ship, dredging can be considerable in the storm at sea, navigation and throwing mud. The Jet Pipe can clean the dirty material from sea

Any pipeline used to make the gas flow down the growth rate is called the nozzle, there are two kinds of commonly used in thermal power nozzle: one is the gradual shrink nozzle, the other is a convergent divergent nozzle, or Lawal nozzle.

Photo of our Jet pipe: 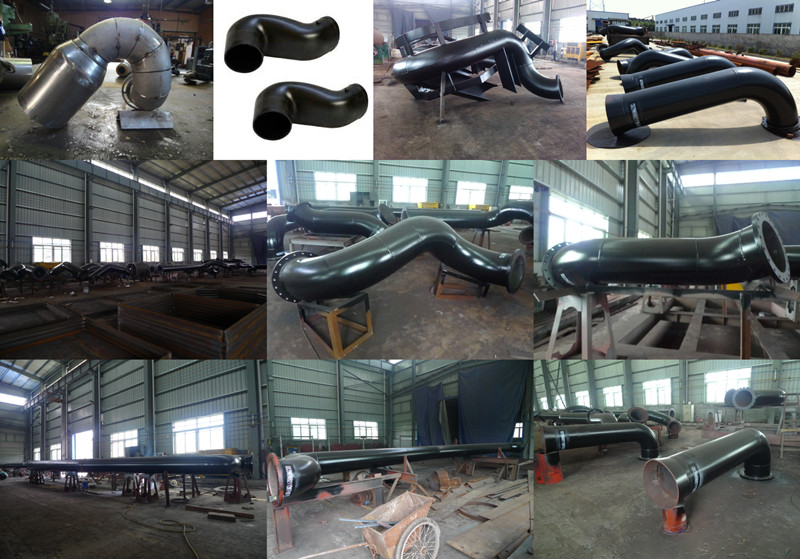 The specifications of our Jet water pipe

High accuracy, fully welded, painted construction can be used for trailing Suction Hopper Dredger, a variety of angles for different position of TSHD, used in conjunction with suction pipe. It is approved BV

B. Construction and procedure

The construction is to be built according to the drawing with rules of good workmanship.

The construction consist straight pipes and variety of angle bends supports, which are carefully manufactured and checked to ensure total length, straightness, angle within the specific tolerances.

All fabricated steelwork used in the construction of the jet pipe will be to manufacturing standard of normal or classification society.

All steel used to be blasted and shop primed both sides.

All materials proposed will be selected to comply with the latest Health and Safety Rules.

Paint systems for hull protection will be of the highest quality (Hempel, Inter, Sigma, Jotun)